It’s the last Monday before Christmas and a good time to start looking into whether we have been naughty or nice. I guess, like most people e

xcept the very few, I have been both of those things but with a marked effort towards getting to be the latter.

Life is short and as the years start moving faster, regrets start piling up. As you can see I am not one of those “no regrets” type of people. I think we all regret doing certain things and, most importantly, I do believe that we should feel sorry about certain things we have done during our life. Most of us have had moments in which we have been hurtful, absent, or simply awful to others. So, as my first formal and public step into the spirit of the season, here is my heartfelt apology to all the people I have hurt this year, for any reason, and whether knowingly or not. To all of you, please accept my call for forgiveness and my promise of a real effort to be better in the future.

Now, one of the things I do not regret about 2011 is where I have gone with my art. It has been shaky at times, a little hard to keep up in terms of quality and quantity of work, but it has proven a breakthrough year in many respects. For that reason I would like to thank, following in my Christmas spirited line of thought, all those people who have helped my art along this year. From family, friends, admirers and critics, to journalists, the media in general, gallery owners, and buyers. You have all helped me along this difficult road of artistic expression and I am very grateful for your support, comments and criticism.

So, now let us turn to some new work!

This is another one of my new paintings from the second semester of 2011 and which have just been uploaded to my website at www.ignacioalperin.com. 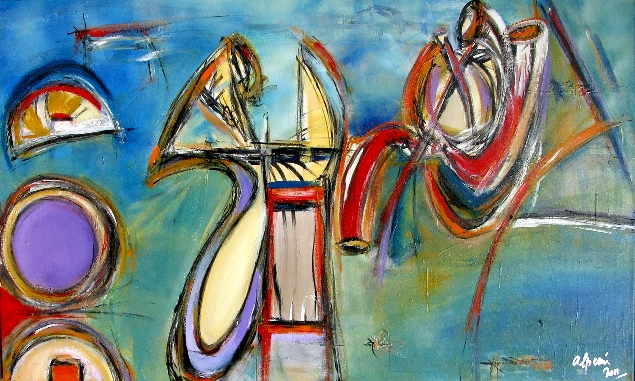 It is called ”Blow by Blow”. Inspired by many of those golden years brassy tunes that are too harsh for the midnight hour but give us a hell of a kick in the rear at times of sorrow, or simply when we are a bit down and we need a nice shot in the arm.

To accompany this painting, I invite you to enjoy Duke Ellington live with his orchestra performing one of those cheerful songs and one of the titles which inspired my composition, this one called coincidentally “Blow by Blow”.

Looking through my videos (http://youtube.com/ignacioalperin) I would like to bring forward one from February this year about the “Making of” my Standard Bank Foundation Gallery Exhibition which took place in March- April 2011. I had forgotten how cool the music sounded. I hope you enjoy it too, either again or for the first time if you have not seen it before.