Any hard working artist will tell you that, when creating a piece, it is always the actual work the one that tells you what it needs, and what it does not.

Writers talk about characters basically writing themselves or dictating dialogue. In painting, no matter how much planning, it will also happen. Some will allow it to happen more than others (I am one of those), but it happens to all of us. Reality takes over the theory. Chance (or what we feel is just chance) takes a look and decides to be heard.

When I am asked about what do I think is my biggest strength as an artist, I always reply that I feel it is probably my capacity to turn what may have originally felt like a blunder (i.e. a deviation from my original and thought out path, at the very least), into some kind of a triumph.

I make a lot of mistakes. Like the gentleman whom, while I was doing some live painting at an event, asked me very politely what was it that I was obviously correcting when he could not see any discernible elements or recognizable figures in my work, the truth is that the difference between intent and chance is not easy to see sometimes from the outside. In fact, I may be the only one who knows that what I did was not what I intended to do. But that does not rule out the fact that for some reason I did something unpredicted to me and even unwanted at the time.

When we are learning, more often than not, we immediately correct course (in painting that means that we repaint and correct). After we start knowing what it is all about, we sometimes respect chance and follow the new course that has just been dictated by the forces of nature. I usually find that my work is a lot richer if I work on the unexpected with as much vigor and excitement as with what I had planned.

My Digital Art Series are another example. I work my drafts in digital form. Then I paint. There is a very reasonable explanation to do this, and one which I may write about in the future, but let´s just say that I test everything with my electronic pen and screen. Colors, shades, textures. Even where my emulsified ink drippings will finally land come into consideration in that digital realm.

Looking through some of my drafts last year, the very knowledgeable and hard working Jack O´Brien, who is the Director and Curator of the Watson Gallery at the Naples Art Association (he has been there for almost 20 years now), suggested I try printing my digital drafts (artwork) on metal. 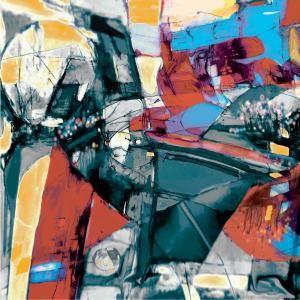 y ALPERIN DIGITAL art series allow me to reach a completely new public and it is an exciting way of venturing beyond paint.

I was not looking to print and my digital work was almost private. My chance conversation with Jack planted the seed. Everything else is now history.

If we want to go a little further into the theory, we could say that there is no chance, and there is no fortuitous, There is only unexpected (because it is so in reference to our expectations).

Thus, in these cases there is only that what was due to happen and we did not see coming.

Now, if you run a nuclear power plant, unexpected may not be that good. But if you are in a creative or executive position, if you are in business, or if you move in the realm of the arts, this may be your chance to add new layers to your work.

I believe everything we do in life can be explained as part of a huge (astronomical may be the word) mathematical equation. Everything is in the realm of a possibility, and in hindsight we may find the elements that explain how that possibility became a probability, and after that, a reality.

As I always say, the fact that we did not expect it only highlights the fact that we did not calculate correctly our path (and because we cannot incorporate everything into our calculation, it is also a reminder of our human limitations). Yet, if it happened, then probability theory will tell you that there was always a big chance of it happening (whatever “it” was) if certain elements finally combined in the formula. Thus those elements were always there  (or within the realm of probability), and we can only see them as we reverse engineer whatever it was. Then, we usually say: “of course, it HAD to happen, how did I not see it!”

Thus treat chance as your friend. It is part of the reality that you did not expect but came knocking at your door. Fortuitous is just another way of saying, I didn´t see it coming. But it came anyway. So don´t fight it (unless it creates a major problem). Embrace it, open your mind,  use it to your advantage and make good use of it, see what you can incorporate (totally or partially) to your original plan, and allow it to open new realms for you (and your art, your project, your career or your work, whatever it may be).

Because the fact is that, if it is here, then there is a very good chance that under the present circumstances, it was always supposed to be here.

Happy surprises and until next time!