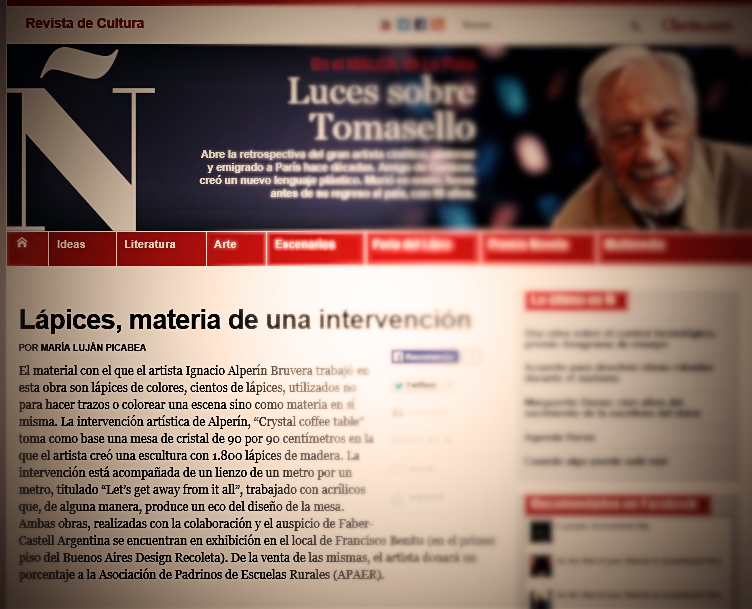 The most popular and competing Western languages in the world are English and Spanish.

For the Spanish speaker, the letter Ñ (roughly pronounced N-ee-A ) is like a symbol of this language´s uniqueness.

In Argentina, the top selling literature, arts and culture magazine, edited by CLARIN (the country´s most popular and largest selling newspaper) is properly called simply “Ñ”.

Yes, just a letter, but one that is the symbol of a whole language.

This magazine is published every Saturday and has average weekly sales of approximately 80,000 copies. Ñ, together with the LA NACION´s newspaper ADN (DNA in Spanish, and a different and perhaps more modern way of asserting where its cultural roots are), are the 2 most popular cultural magazines in the country.

I have been privileged enough to have been featured in both at different times, and it is always a proud moment when I can see my work reproduced in such prestigious and popular publications, and particularly when I find myself surrounded by articles on truly amazing local and international artists.

Last Saturday (May 25th ) I was surprised to find my latest intervention, and what has become so far this year´s one of my most popular works (my “Crystal coffee table with color pencils”), being featured on page 6.

It is always fun to see how a writer approaches a piece of work. I still remember a short article in the same magazine a couple of years ago, in which a journalist with immense generosity, compared and intertwined my work in my “Visual Jazz Series” with Julio Cortazar´s writings and his love for Jazz (for an explanation of how my art and music are interconnected, and particularly Jazz, check out “Jazz means freedom” at http://wp.me/pN8b8-9s  ).

This time the reporter took a more clinical approach, which oddly enough I feel it is the right way to look at the piece.

First of all, because only a live viewing will reveal a certain depth and 3 dimensionality, that cannot be explained through a photograph. Secondly, because the piece is intriguing and that fuzziness is better left for the viewer to unravel, rather than subject it to an explanation that can only partially encompass all that it has to offer.

And I can only invite you, if you can, to have a look at it live at the Buenos Aires Design Shopping Mall, where it will be on show for a little while longer. And if you can´t, do not worry, at the very least I have some great pictures from the great Fabian Cañás which I have published here previously and on Facebook for you to look at and enjoy. I hope you do.

Until the next time.