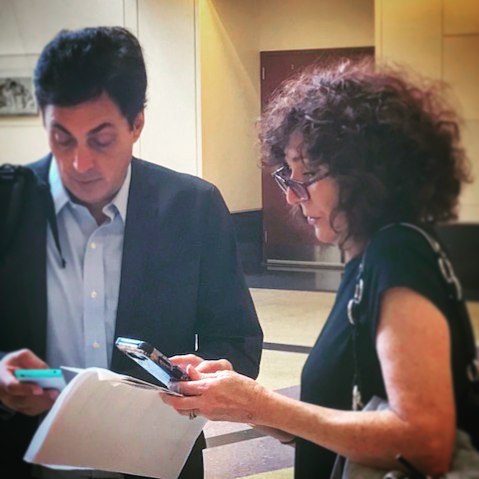 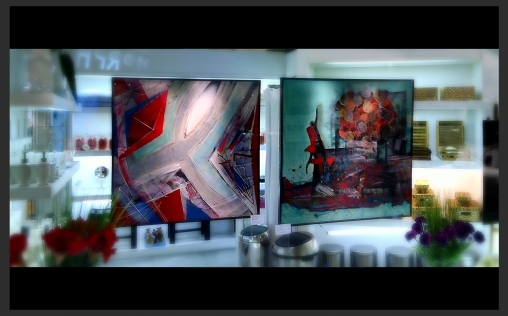 Our beloved Ella Fitzgerald once said: “Just don’t give up trying to do what you really want to do. Where there is love and inspiration, I don’t think you can go wrong.”

When I first met Ignacio Alperin, I was intrigued by the fact that the composition and color treatment in his work, facets that are so visual, are influenced by other senses – that is, the sound and emotional intensity he derives from a variety of musical genres, including Jazz, Soul, Motown, the American songbook, Tango, and the Classics, which fascinated me even more.

Therefore, in my task to adequately capture the artist’s work in words, it is insufficient to use only visual terms. A discussion of contour lines, color, positive and negative space, and abstraction only tells part of the story. To begin to characterize Alperin’s work more fully, it is perhaps more necessary to augment the visual portrayal with musical and emotional metaphors to express his aims and ideals with such passion and free spirit, such as tempo, syncopation, and pitch. The capacity to create multisensory experiences is a gift in the spirit of the true artist who believes in the eternal search for the perfect alchemy of shape, color, and line along with volume, speed, and emotion, and is evidenced by these images that combine the landscapes of sound and sight into captivating works of richness and depth.

The meaning of “symbolist tradition” in art has been used to express a view in which the artist creates works that evoke as well as describe. To quote one of the great masters of this school, Wassily Kandinsky: “The relationships in art are not necessarily ones of outward form but are founded on inner sympathy of meaning.” The works of Ignacio Alperin are an exemplary exponent of that view, eliciting the power, joy, and freedom an eternal traveler attains when he seeks to materialize his dreams and to express his views without doubts or fear.

Alfredo Ratinoff was born in Buenos Aires, Argentina, where he trained in ceramics with his master Teodolina Garcia Cabo starting at the age of eleven. He then studied at the National School of Ceramics and also studied drawing and painting at the National Art Academy.
Alfredo specialized for many years in large scale installations of tile and mosaic murals and his works are in many private collections all over the United States and have been exhibited at the Museum of the Americas at the Organization of American States, The N.A.S.A Headquarters in Washington D.C, The AT&T Headquarters in Oakton ,VA, Barnes & Noble Corporation in Rockville, MD and New York, N.Y, Strathmore Hall Art Center, Bethesda, MD, The Target Gallery at the Torpedo Factory Art Center, Alexandria, VA and the South Florida Art Center in Miami Beach, FL. He also has the distinction to be in the permanent collection at the Embassy of Argentina in the office of the ambassador.
In 2004 Alfredo created a stained glass piece for the mausoleum of the renowned Cuban singer Celia Cruz in Bronx, N.Y commissioned by Hispanic TV host Cristina Saralegui. Most recently, Alfredo was selected to be the artist in residence for the AARP Foundation during the 2007 Women’s Vision Summit in Tucson, Arizona where he created one-of-a-kind pieces that were presented to corporate donors at the event.
Alfredo Ratinoff was for more than 20 years a faculty member for the ceramics department at the Resident Associates Program at The Smithsonian Institution in Washington, DC. He was selected by the Education office from the Embassy of Italy to work in the 2004 summer program at Georgetown University teaching mosaic workshops sponsored by a grant from the National Endowment of Humanities in Washington D.C.
In 2007 Alfredo was invited by the Center for Renaissance and Baroque Studies at the University of Maryland as a faculty member to teach ceramics at the Multi-Disciplinary Summer Institute for Maryland School Teachers. In 2008, as the current artist-in-residence for Lee Arts Center in Arlington, Virginia, he designed mosaic columns for the center’s Butterfly Garden for Arlington County residents. During fall 2008, he completed his installation of “Zodiac Art”, an interactive piece involving mosaics, the twelve signs of the zodiac, and kaleidoscopes, at the mansion at Strathmore Music Center in North Bethesda, Maryland. He serves also as a curator for the art committee at the Inter-American Development Bank in Washington D.C. Alfredo currently resides in Philadelphia where he also has his private studio.

Ignacio Alperin is an international artist based in Buenos Aires, Argentina. He grew up in Australia and has lived in several countries around the globe.
The selection of works in his exhibitions are compellingly influenced by his synesthesia (”gift” he shares with Kandinsky).
His art is full of ideas, movement and visual interpretations of musical compositions -from Jazz, Soul, Motown and the American songbook, to Tango and the Classics-.
The end result is a visual idiom that borrows from the inventive and spontaneous methods of jazz musicians. This is so much so that his style has been often described as a visual kind of jazz, or “Visual Jazz”.
We find in his paintings a marked rhythmic musicality and improvisational counterpoints, which are always based on a well thought-out idea.
While his robust use of an extended palette extracts unthought-of shades and gradations that have become a signature and a characteristic of his bold and powerful style.